"I don’t have that pain at night anymore, very rarely. I actually got out of bed without crawling, and I can make the bed! My back is a huge issue and doing Block Therapy has really helped my back." My name is Michelle Thompson and I’m retired. I used to work for the president of a large insurance company. I’ve been retired for about 11 years. I started going to the gym and that’s where I was introduced to Block Therapy.

I have a really bad back and I was hoping that it would help my back. About a month into the program using Deanna’s program as well as going to the gym where they teach it - I could make the bed! That was so exciting for me to get up one morning and say to my husband “I actually got out of bed without crawling, and I can make the bed!” That was pretty exciting. I know it sounds ridiculous, but it was pretty important for me.

My back is a huge issue and doing Block Therapy has really helped my back. I know I have scoliosis and I didn’t realize how crooked I was until I saw my before pictures. I am hoping that by next year at this time maybe my back will straighten out like that little Zenon guy who amazes everybody.

I’m a golfer and I found it difficult to golf this year because my back was so sore. I had to ride a cart which I had never done before. Once I was into the Block Therapy for a month or 6 weeks I was able to start walking on the golf course again so that was a huge improvement as well. I feel that my torso is a bit longer, I feel that I have a better posture, thats the changes that I feel.

I had so much difficulty getting out of bed, not only couldn’t I make the bed, but I could hardly get out of bed. I was crawling to get out of bed until I started doing Block Therapy. I felt like I had more energy, and I just feel better. I just think it’s such a wonderful program to do. It’s so easy, you just have to get those Blocks out. You can do it without using the videos because after a while you learn what to do.

I would probably have a really sore back. I mean I do have other aches and pains like everybody else. A couple of weeks ago I was really having difficult sleeping because I had such a sore hip. I emailed Deanna to ask if I could meet with her when I get back to Winnipeg. She said please send me some pictures, and she looked at the pictures and I was amazed that she could see from those photos that it was the fascia on my left leg around my knee that was bothering my right hip. I was amazed at how she can tell these things, and then she gave me a bunch of classes to work on. I don’t have that pain at night anymore, very rarely.

I’ve tried to recruit so many people to do Block Therapy. I think the best thing to do is to just tell people the success that I’ve had and not push them. My daughter joined Block Therapy 2 weeks ago she bought the whole program, I was so happy to hear that. It’s not because I ever told her to do it, it’s because I just talked about how successful it was for me and how much I enjoyed it. I would tell people it has saved my back, it really has. It’s saved a lot of people’s backs I’m sure. 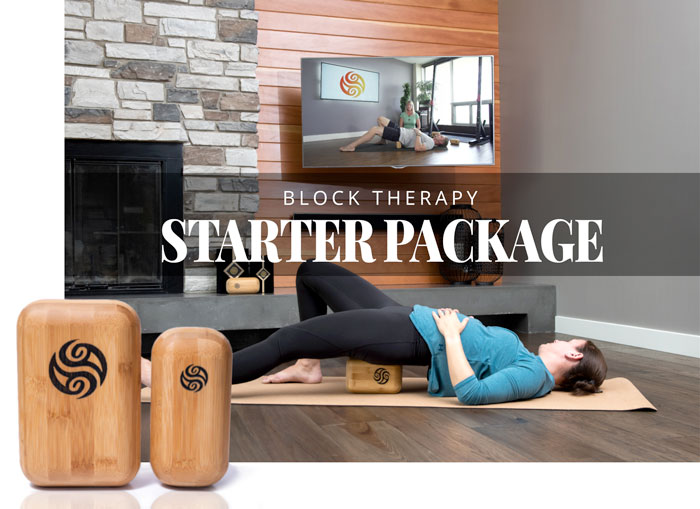